Error bars color on the legend

A quick question: how to add errorbars color to the legend? I need to explain what is a shaded area around the trace (+/- one standard deviation), but I cannot find the option to add this explanation to the plot legend so that is automatically updated (the name is taken from the wave name).

Thank you for your help. 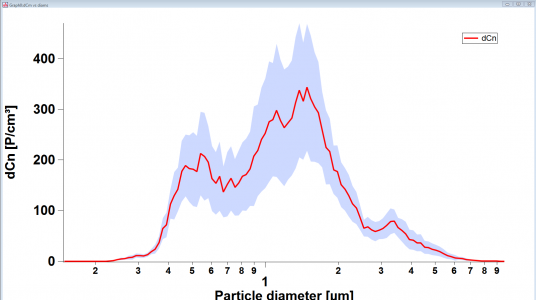 I've tried to do this in the past but I couldn't find a way. The legend dialog allows the specification of a point number of the wave being displayed but it doesn't seem to know about the error wave. Would be useful to do this but I guess no answers to your question so far means there's no way/trick.

You're right- there is no way to get Igor to include error shading in the legend symbol. There should be; maybe Igor 10? But no promises!

Well, here's something that gives the at least approximate appearance you want, with a great deal of effort and no convenience. You have to set colors yourself, and it doesn't update when you change the trace appearance.

Let's break that down...

Remember that this command requires "\\" to get a single backslash into the string that's stored in the textbox.

\x-40 Move the X position leftward so the marker will be at the start of the line instead of leaving a lot of blank space.

junk The name of the wave I used for the graph. This will be actual text in the annotation.

I did warn you about a great deal of effort and no convenience! 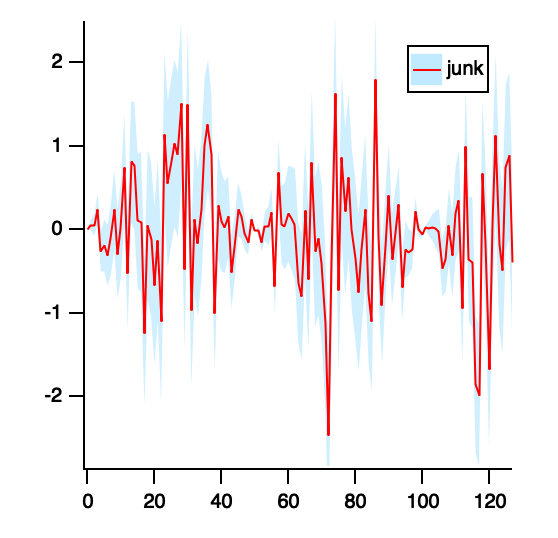 I have a comparable approach to show deviations in graphs that I am making. I use a arrow line as shown below (the label should say ± 1 sigma) 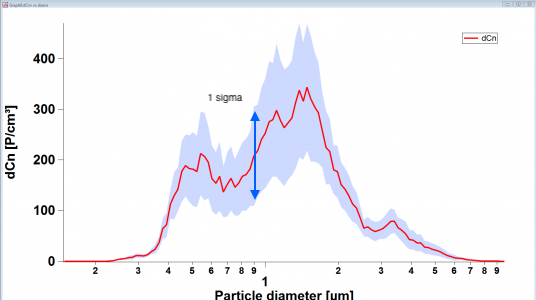 The default color of error bar shading is the trace color but partially transparent. If you have multiple traces and each is a different color, it should be pretty obvious which shading belongs to which trace.

If your graph is just what you've shown us, can't you just put something in the legend like "shaded area shows +/- one standard deviation"?

John's solution/hack might be very helpful if you have multiple traces and the error bar shading color has no obvious relationship to the trace color, but it doesn't seem like it would help if the information you are trying to convey is what the shading means, not which trace the shading belongs to.

It would be useful if we had an escape code that could show the trace and error bar/shading colors. Maybe \se (symbol + error) instead of just \s.