Start by creating a wave with a known slope and additive Gaussian noise.

The simple linear regression analysis is obtained by:

The results appear in the Linear Regression table (shown transposed):

When a slope is not specified the null hypothesis is that the slope is zero and the t-statistic is not relevant. The regression results above clearly reject this hypothesis with regression line given by:

To plot the regression and the data curves execute the commands: 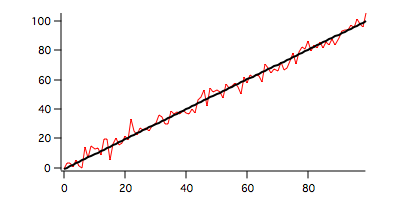 Here the red trace corresponds to our input data and the black trace is the regression line.

You can now add the two bands to the graph: 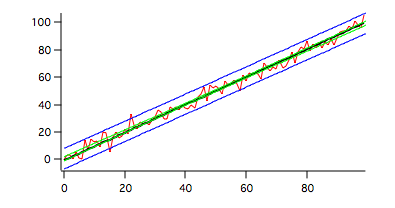 To see the results of the zero-slope hypothesis test on different data set we generate data that have zero slope and random noise: 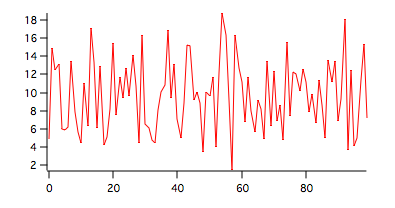 A graph pf data2 is shown above. To run the test execute the command:

As expected, F<Fc and the hypothesis of zero slope must be accepted.

Testing the hypothesis that the slope b=beta0. Using the wave data1 which was generated with a unit slope we have:

It should be obvious from the definitions of L1 and L2 that any value of beta0 outside the range [L1,L2] will be rejected.

4. Linear regression for more than one wave.

You can run the linear regression test on multiple samples using the command:

In this case the slopes' test results in F<Fc so the hypothesis of equal slopes is accepted while elevation's test results F>Fc implies that the equal elevations hypothesis is rejected as is the possibility of coincidental regression.

You can also test waves of unequal lengths as in the following example:

In this case both the slopes and the elevations are determined to be the same. The single test for coincidental regression would also indicate that the three waves have coincident regressions.

You can perform Dunnett's multi-comparison test on the elevations of the several waves. In this example we define the first input wave as the control sample (/DET=0):

The operation computes the linear regression and the general multi-comparison as described above. In addition it displays Dunnett's MC Elevations table for tests of each input wave against the control wave:

6. The Tukey test for multiple regressions

The test depends on the F tests for the slopes. If the slopes are determined to be the same then the Tukey test compares elevations. Otherwise, the Tukey test performs a multi-comparison of slopes.

Since the slopes were determined to be the same, the Tukey test was performed on the elevations and the results are displayed in the Tukey MC Elevations table:

As expected input waves 1 and 2 do not match the elevations of the other waves.

7. Regression analysis with multiple Y values for each X value

When the data has multiple Y values for each X value you need to store the input as a 2D wave there each column represents one set of Y values. In this example the wave dataMYV consists of 30 rows and 6 columns so there are at most 6 Y values for each X. There are 6 NaNs representing missing values or padding used to format the input for the operation in case the number of Y-values is not the same for all x values. The X-values are implied by the wave scaling of the rows with start=1 and delta=3.

The results are displayed in the "Linear Regression" table (shown transposed):