You can embed graphs, tables, and panels into other graph, panel, and page layout windows. The embedded window is called a subwindow and the enclosing window is called the host. Subwindows may be nested in a hierarchy of arbitrary depth. The top host window in the hierarchy is known as the base. In the following example, the smaller, inset graph is a subwindow: 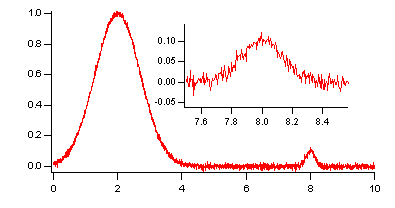 In the next example, the two graphs are subwindows embedded in a host panel:

This example is derived from the CWT demo experiment which users can find in the Analysis section of their Examples folder.

Subwindows may be positioned in their hosts in a wide variety of ways. You can specify the position of a subwindow numerically using either absolute (fixed distance) or relative modes. You can also attach key locations in a subwindow to named guides.

Guides are horizontal or vertical reference locations defined by the immediate host of a subwindow and may be either fixed (built-in) or moveable (user-defined). Built-in guides represent fixed locations of the host such as its frame or the interior plot area of graphs. User-defined guides may be based on built-in or other user-defined guides. They may be defined as being either a fixed distance from a guide or a relative distance between two guides.

Reference points of a subwindow that may be attached to guides include the outer left, right, top and bottom for all subwindow types and, for graphs only, the interior plot area.

A subwindow can be moved by dragging its frame and resized using the handles. If a handle is positioned near a guide, it will snap in place and attach itself to the guide.

Guides are especially useful when creating stacked graphs. By attaching the plot left (PL) location on each graph to a user-defined guide, all left axes will be lined up and will move in unison when you drag the guide around.