In this example we have three groups of data contained in the numeric waves data1, data2 and data3. The values represent angles in radians:

The data are shown here in a polar plot: 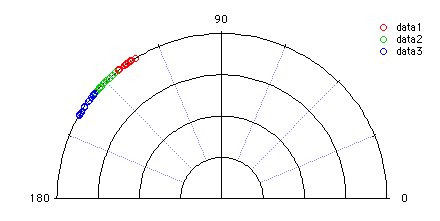 The results of the test are shown in the "Kruskal-Wallis Test" table:

The H statistic is clearly below both the Chi-square and Wallace approximate critical values so the hypothesis H0: no effective dispersion can't be rejected at the default 0.05 significance level. Note that in this case we have used the /ANGM flag to compute the relative dispersion of the data about each sample's mean instead of providing sample means using the /ANGW flag. Here the operation first computes the mean of each sample and then performs the Kruskal-Wallis test on the difference of each datum from its corresponding mean value.

The results of the test are shown in the "Mann-Whitney Wilcoxon Test" table:

As one would expect, we get a P-value which is much greater than alpha (0.05) so H0: no dispersion can't be rejected.

In this example we test the same samples (which were generated as data centered at 125 and 135 degrees respectively) relative to mean direction of 135 degrees for both. To run the test execute the command:

The results of the test are shown in the "Mann-Whitney Wilcoxon Test" table:

Clearly, the P-value is less than alpha and so we reject H0.