The StatsSRTest operation contains both parametric and non-parametric serial randomness tests. In the following examples we illustrate how they work (and how they fail).

The first data set is created with the command:

The resulting wave appears in the figure below. 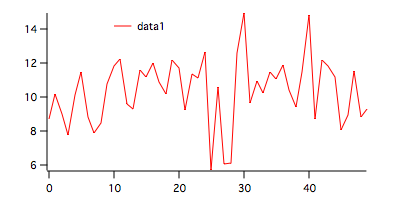 To run both tests on this wave execute the command:

The first six rows in the table belong to the parametric test. In this case we have a statistic C which is smaller than the critical value so the hypothesis H0 that the wave contains a random variation is accepted though the P-value is not particularly high. The remaining rows of the table belong to the non-parametric test. After listing the number of runs up and down, the table includes the longest run and the probability that a run of such length can happen by chance. The last two rows contain the total number of runs and the probability that such a value can be attained by chance.

2. Testing serial randomness in the presence of non-random data segment.

We create the second data set by duplicating the first and setting a contiguous run of length N/10 to a constant. The following commands were used: 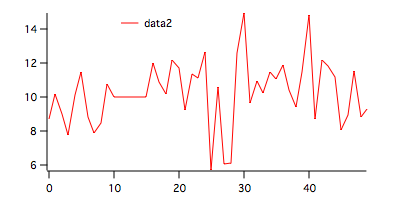 The results of the parametric test are similar to those of the test in (1) above. The non-parametric tests shows a slightly lower probability of attaining 31 runs by chance but this value is still not enough to reject H0.

3. Testing serial randomness in the presence of a non-random segment set to be different from the mean value.

As expected, the non-parametric results remain unchanged but the parametric test statistic C exceeds the critical value and so H0 must be rejected. This illustrates a major deficiency of the parametric test in that it is less likely to fail if the non-random sections have values sufficiently close to the mean.

4. Testing in the presence of a very long non-random segment.

We used the following commands to create the input wave: 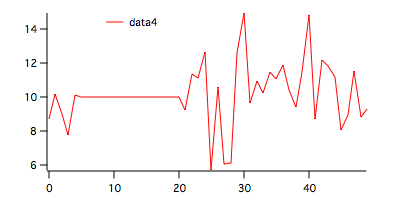 In this case, despite the presence of a very long constant segment, the parametric test does not reject H0. On the other hand, the non-parametric test indicates a vanishing probability of the longest run being that long by chance and (all) run probabilities are too low to accept H0. 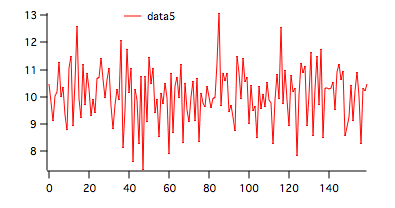