Smoothing removes short-term variations, or "noise" to reveal the important underlying unadulterated form of the data.

Smoothing is a kind of low-pass filter. The type of smoothing and the amount of smoothing alters the filter´s frequency response: 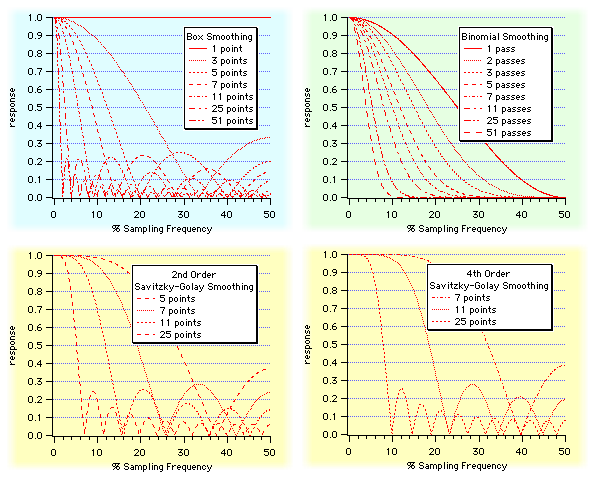 The simplest form of smoothing is the "moving average" which simply replaces each data value with the average of neighboring values. To avoid shifting the data, it is best to average the same number of values before and after where the average is being calculated. In equation form, the moving average is calculated by:

Another term for this kind of smoothing is "sliding average", "box smoothing", or "boxcar smoothing". It can be implemented by convolving the input data with a box-shaped pulse of 2*M+1 values all equal to 1/(2*M+1). We call these values the "coefficients" of the "smoothing kernel": 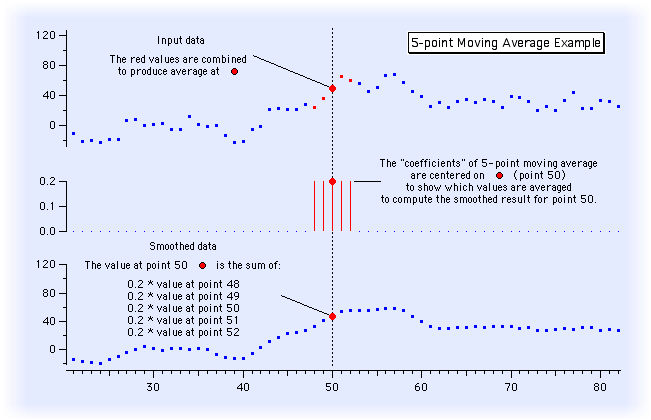 Binomial smoothing is a Gaussian filter. It convolves your data with normalized coefficients derived from Pascal´s triangle at a level equal to the Smoothing parameter. The algorithm is derived from an article by Marchand and Marmet (1983).

Savitzky-Golay smoothing uses a different set of precomputed coefficients popular in the field of chemistry. It is a type of Least Squares Polynomial smoothing. The amount of smoothing is controlled by two parameters: the polynomial order and the number of points used to compute each smoothed output value.