I'm working on a routine that is supposed to consolidate the results of a clustering process done over a few iterations in IGOR into a single text wave.

I start the process by creating a 2D wave that contains the percent overlap between a set of peaks in my data. Based on this overlap wave I then have a routine that determines whether the peaks get clustered together if their overlap exceeds some threshold value specified by the used. The percent overlap matrix between the generated clusters is created and the clustering process is repeated until the overlap matrix does not have any values above the threshold value.

Here's an example of the text waves I'm mentioning: 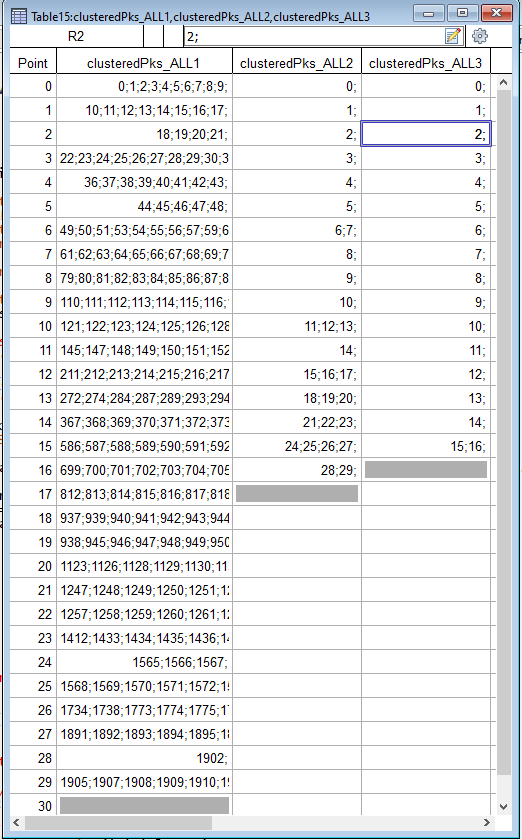 I made a routine that got me close to that but it's not quite right yet as shown here: 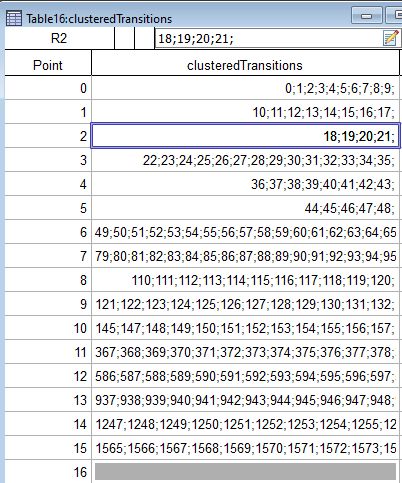 The results from the clustering are placed into a text wave called clusteredTransitions that has as many points as the number of clusters from the final iteration. Here, cluster 0 [point 0] is made up peaks 0;1;2;3;4;5;6;7;8;9; and so on and so forth. The problem is that the last cluster does not catch the final set of peaks [points 28 and 29] from clusteredPeaks_All1.

Here's the routine that I've been trying to use to get this working:

Any suggestions on the best way to proceed about this?

I've attached an IGOR file with the relevant waves and procedure.

Thanks for the help!!

do you get maybe an index out of range error?

I could imagine a different approach: say you have a wave containing the peak numbers and sets of clusters (e.g. 3 and 2) in the following way:

Then you can use simple matrix calculations to get the peak numbers in the final clusters.