NeuroTools: an interface for flexible data organization and analysis

NeuroTools was originally written with electrophysiological and functional imaging data in mind, but is now developed as a general purpose analysis suite. With the ability to add user analysis packages, NeuroTools can be as expandable as the user wants. Many of the data organization concepts in NeuroTools were inspired by previous work by Dr. W. Rowland Taylor at Berkeley and Dr. Rob Smith at Penn.

At its core, NeuroTools is an alternative data browser that allows users to define, save, and recall 'Data Sets' using powerful wave matching tools. Data Sets can be organized and filtered in a variety of ways, allowing the user to customize how they run batches of waves through a function. 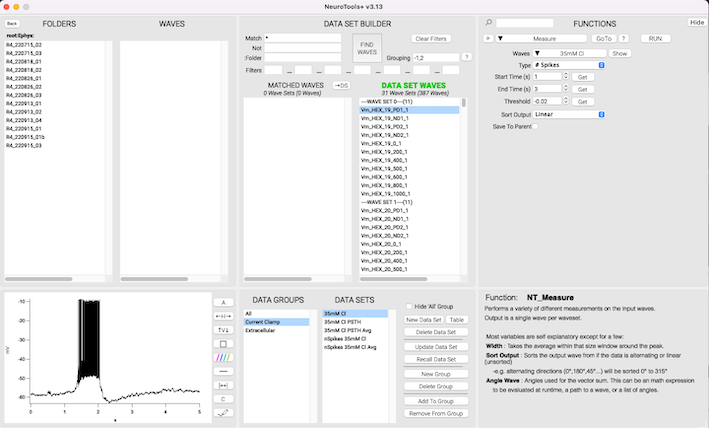 While NeuroTools provides a suite of basic built-in functions, users can easily write their own add-on package, or import any of the specialized packages available from https://www.benmurphybaum.com/NeuroToolsStore.html

Below is an example of selecting a function from the ScanImage package, which is a downloadable add-on designed to load, explore, and analyze 3D and 4D image stacks generated by ScanImage microscopy software. 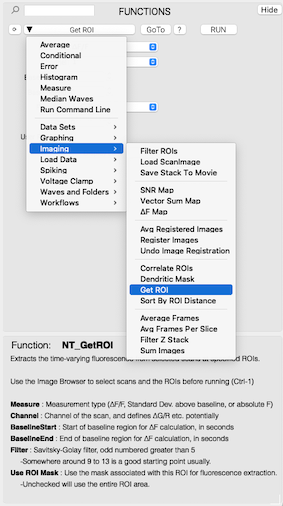 Analysis functions that are included in an imported package are automatically incorporated into the NeuroTools interface, and have access to all user-made data sets. For instance, below is an example of the SetScale function. By using a small amount of specialized syntax, the control layout--including resolving variable types, wave inputs, and menu items--are automatically generated from the written code, so the user doesn't need to manually define input controls. 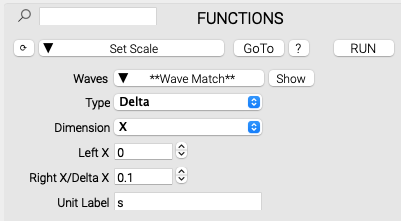 The user code is parsed by NeuroTools to determine how to neatly display its inputs in the GUI:

Data sets can be defined using wave matching tools in the main interface or, for a more permanent solution, they can be directly defined using a data table. Data sets can be sent to a function as a whole, or in subsets, depending on how the user has organized the data set. For instance, consider a data set that has 500 waves--10 neural recording sessions, each with 5 repeats of a 10 voltage step stimulus. In a single click, you could send each set of 10 voltages to a function individually, one subset at a time, by organizing the data set using the wave grouping input "/B=10" : 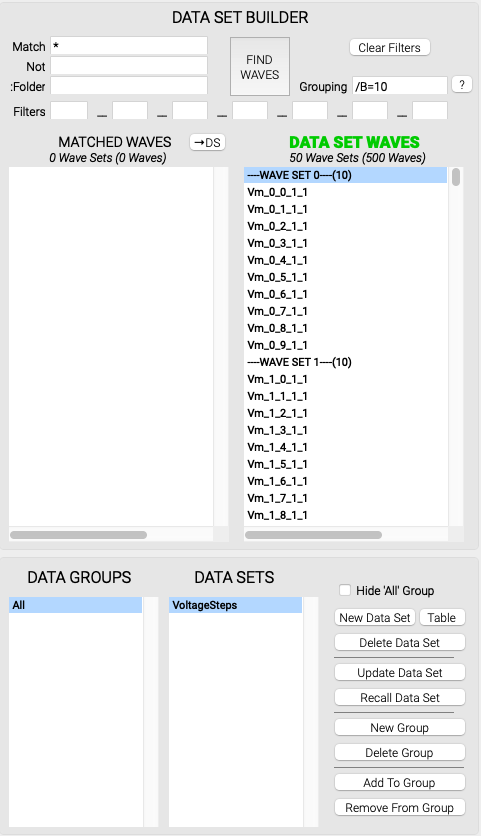 /S=n : Groups data with stride of n (every nth wave is in the same subset)

/WG=n : Groups data according to the wave name residing in the nth underscore position.

/A = n : Sorts data alphanumerically according to the wave name residing in the nth underscore position.

/WSI = n : Wave set index. Only includes the range nth wave, or range of waves, within each subset.

These organizing tools are stackable, so /B=10/S=2 would first put the data in blocks of 10, and then organize each resulting subset by a stride of 2. This flexibility should allow a user to achieve nearly any arbitrary organizing principle.

NeuroTools has an integrated command line that has access to its data sets. This allows the user to perform single-use operations in batch. Using the above-mentioned VoltageSteps data set as an example:

<VoltageSteps> references each wave in the data set called 'VoltageSteps', and executes the operation on it. <wsi> tells the command line to use the wave's index in the subset as the multiplier. This results in a step function from -0.04 incrementing by 0.01 for each wave in each subset.

As more functions get added into NeuroTools with add-on packages, they can be slightly cumbersome to navigate to using the functions drop down menu. A live text search tool remedies this annoyance.

Unzip the file, open INSTALL_NEUROTOOLS.pxp in Igor. Installation and file distribution will be carried out automatically from there. Restart Igor, and the GUI can then be loaded from the NeuroTools menu.