This project supplants the built-in Quick Fit, which is user to quickly fit data displayed in a graph. Super Quick Fit provides all functionality of Quick Fit and adds several convenient features. I tried my best to test everything thoroughly, but sometimes bugs slip through. Bug reports and suggestions for new features are always welcome. I am happy to add more useful settings, peak shapes or derived values if I receive feedback. Currently, 2D fit support may not be perfect since I don't have any meaningful data to test everything. If you have suggestions for improvement of 2D fitting or can test this functionality in detail, then please let me know. 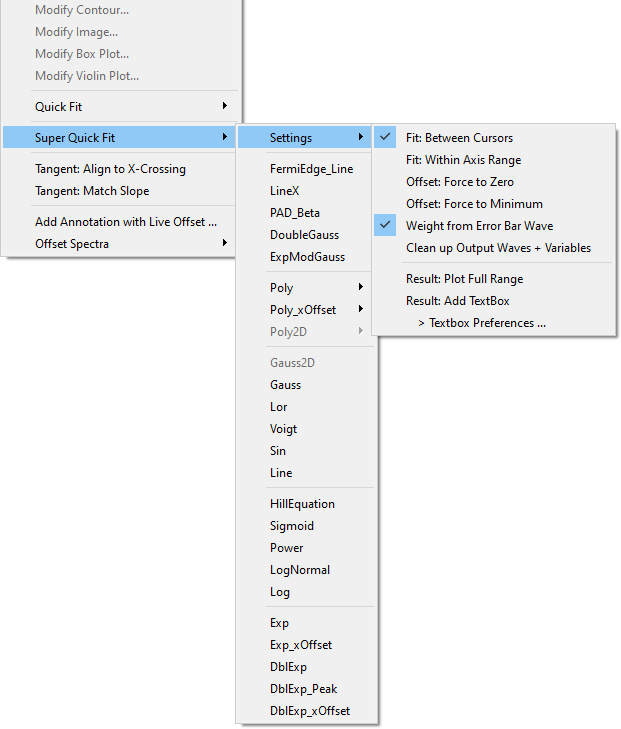 Settings are saved in the current experiment (as the string root:QuickFitMenu_settings) to keep used settings consistent for each experiment file. But the last-used settings are also persistent and are loaded for each new Igor session, which makes it possible to set up your favorite settings and keep using them.

Additional parameters such as FWHM, area, height etc. (where applicable) are printed in history and the graph's text box. Currently, the following functions output derived parameters: LineX, DoubleGauss, ExpModGauss, ExpConvExp, Line, Gauss, Lor(entz), and Voigt. You can also set up your own function to output additional derived values after a fit (see below).

Calling Super Quick Fit from the Command Line or Your Own Code:

Super Quick Fit can also be run in code by executing:

The graphName can be the name of any open graph or just "" for the top graph. traceName can also be left empty ("") to fit an image plot to the first trace in the trace list of the chosen graph. fitFuncName must be a valid built-in or user function name. SuperQuickFit() also returns error codes or 0 if the fit was successful. The fit settings are taken from the last saved settings and cannot overwritten at present. Set up everything to your liking in the right-click menu before running the function. This function is most useful as an easy way to fit multiple traces in a graph or traces in multiple graphs.

The error codes are:

Adding Your Own Fit Function:

Adding functions is easy. You only need a normal (such as created with the curve fit dialog) or all-at-once fit function and a second function which calculates the initial guesses. Let's look at a simple example, such as the LineX function included in the package:

To create initial guesses and at the same time make this function appear in the Super Quick Fit menu, you need to provide a second function which has the name YourFitFuncName+"_prepareCoef", which has a special structure SuperQuickFitStruct as input. In our example the function needs to be called LineX_prepareCoef, like this:

The function needs to create a wave with the correct number of coefficients (2 in the example) and initial guesses which are likely make the fit succeed. The created coefficient wave then needs to be fed into the wave assignment s.cw. By the way, you don't have to call this wave W_coef. But if you choose this standard name, the coefficient wave will be properly deleted if you have the 'clean-up' setting active. Now you can select the function from the Super Quick Fit menu.

So far, the initial guesses are simply x0 = 0 and m = 1. This may be too simple for a good guess. You could, for example, access the input data to calculate more reasonable guesses. The full function for LineX looks like this:

Here, the slope m is taken from the derivative of the input data (=> wave s.data). Also, the offset x0 is calculated from the data provided by the fit kernel. Here, s.holdMode is the current offset setting (1 means offsets are forced to zero) and s.xBase is the current x minimum (either from the cursor or the minimum of the input data). This makes sure that the x0 coefficient is properly set to fix the line to the cursor or to zero.

By the way, the 'force offset' setting is by default applied to the first coefficient. If you want to hold other coefficients, you need to provide an appropriate hold string to s.holdStr (e.g., s.holdStr = "00001" fixes the fifth coefficient). The full structure definition looks like this:

Adding Your Own Derived Values Function:

Super Quick Fit supports additional data processing after the fit is done, such as calculating derived values from the fit results. For this, create a function named YourFitFuncName+"_derivedVals". In principle, you can do anything in this function, but the main purpose was intended to return a string to print into the history. Let's again look at an example (from LineX):

This function calculates the y-intercept for the line from the fit coefficients (s.cw) and the covariance matrix (s.sw) and then prepares an output string printStr with the result. Here, the result is also added to the default text box, but you can of course omit this step. All available data is again received from the same SuperQuickFitStruct. You can also add code for a follow-up analysis of the result, saving of the data to disk or whatever you like here. Basically, you can add anything you want to have done after invoking the fit from the menu.

John, thank you for your comment. I am happy that you found this interesting. At first, I just wanted to add in some functions to the Quick Fit menu, but it was not possible to modify the official menu structure. The I started my own submenu, which quickly grew into this full 'replacement'. :) Would be great if some features would find their way into the official Quick Fit at some point. I think not many people will find this package after all.

Looking at the screen shots, and reading some of the description, it is clear you have added user-define fit functions. You must also have some auto-guessing code for those functions. The reason the built-in Quick Fit menu doesn't list any user-defined functions is the lack of a way to provide auto-guessing. So I guess that would be a necessary enhancement to make that a possibility.

What does Offset: Force to Minimum do?

You have also organized the fit functions into similar groups, instead of simply listing them in the order that appears in Igor, which is simply the order of an internal table. That includes interpolating some user functions between built-in functions. That is only possible because you know which user-defined fit functions are there, and where they go!

Yes, the user-defined fit functions need an additional function which provides the initial guesses. I have chosen the special name FitFuncName+"_prepareCoef" for this. I could imagine that - should you think about implementing something like this into Quick Fit - as soon as users provide such a specially named function in the right format the fit function will appear in the quick-fit menu. That's how I do it here. The code simply scans for functions with this ending and then adds these fits to the menu automatically.

Force to Minimum sets and holds the offset coefficient (mostly Y0, or X0 in some cases) to either the minimum of the data (within the fit range) or, if cursors are present, to the minimum cursor value. This can for example be used to fix the Line's 'a' coefficient to the data's first point. The name is a bit ambiguous, because I thought users can choose themselves what is meant by 'offset' and prepare their guessing function accordingly. Also, this is of course problematic when cursors are also used to define the fit range. But it is just a first proposal, and may be refined in the future.

I was thinking about the possibility of adding a line to the special comments in a fit function that names a guessing function.

You must have developed a standard guess function format?

That's right. The function has the format:

SuperQuickFitStruct provides all kinds of parameters like the current settings, waves and fit range which can be used to find a good guess. The minimal output is to pass a created coef wave with the correct number of points to s.cw at the end.