This is a tool for quickly aligning and comparing two (1D) data waves and calculate the difference, sum, product or quotient between the two on the fly. The first input data is modified via controls while second input data acts as the reference to compare against. The former can be shifted, offset and scaled manually with respect to the reference to find the optimal overlap or to extract certain spectral features from the difference etc. The the original purpose was to calculate the difference (hence the name Difference Generator), but support for addition, multiplication and division has been added.

The underlying original data of both the edited wave and reference wave is never modified in any way. The comparison is handled with temporary data, and modifications (default wave ending "_mod") as well as the arithmetic result are always saved as new output waves. The default wave ending for the output is "_dif" for subtraction, "_sum" for addition, "_mul" for multiplication and "_div" for division. All settings are saved in the output wave's notes and will be reloaded automatically upon restarting the tool with the same input. The program is fully folder aware.

To start the user interface, select one or two (1D) waves in the Data Browser and then go to 'Spectra Tools' -> 'Difference between Spectra ...' in the top menu. Or use the command line:

The second wave selected in the Data Browser (or the wave provided by the optional 'refwave' parameter) comes preselected as reference when starting the GUI. A quick overview of all controls can be found below:

How the result is saved

The result is saved next to the input wave (the data to edit) as 'wavename +  "_mod"' for the modified data and  'wavename +  "_dif"' (or "_sum", "_mul", "_div" depending on the mode) for the (inverted) result. All modification settings are saved inside the wave note of both of these output waves. Here is an example where 'first spectrum' was edited and 'second spectrum' was the reference: 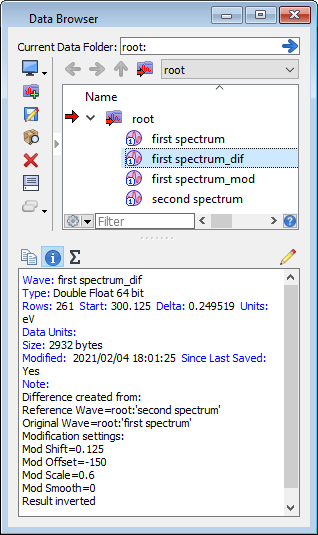 Loading the tool with the same initial data ('first spectrum' in this case) will reload the last session from the '_mod' or '_dif' wave (if '_mod' does not exist). Note that loading a '_dif' or '_mod' wave directly will just start a new session with this data (this makes it possible to create differences of differences etc.).The wave to edit and the reference wave can be in different folders. If neither a 'dif' (or 'sum', 'mul', 'div') or 'mod' wave with the same name is found in the input wave's folder, then the default settings are loaded. It is thus recommended to move the result and modified waves together with the original wave to a new folder to be able to reload the settings later. Then what will be reloaded if you have mixed result waves from summing, multiplying etc.? The loading hierarchy is 'mod' > 'dif' > 'sum' > 'mul' > 'div', and thus deleting the 'mod' and 'dif' waves will load the settings from the 'sum' wave if present.

What is the purpose of the 'Use Ref. Name' setting?

Imagine the following scenario: A 'baseline' data and then several spectra have been measured in succession like this:

Lets assume you want to remove the baseline wave from all the spectra, but the spectra should not be modified (for example, to preserve their relative shift or intensity). This is achieved by modifying (shifting, scaling etc.) the baseline for each spectrum individually and then saving the calculation result next to each spectrum. Load the baseline as wave to modify and one spectrum as reference, then do the modification (since the roles of edited wave and reference are reversed here, this usually means 'Invert' needs to be activated). Before saving check 'Use Ref. Name' to save the result next to each spectrum. This will give:

What if you reload spectrum1 but have conflicting settings in waves spectrum1_mod and spectrum1_dif? In this case spectrum1_mod is loaded according to the hierarchy 'mod' > 'dif' > 'sum' > 'mul' > 'div'.

Settings inside the procedure header

The procedure header contains several settings as static constants, which can be edited to your liking:

Nice looking, chozo! It has a lot of features that aren't in the Wave Arithmetic panel.

Thank you John! As the name suggests, this project started to make it possible to create differences with manual control and instant feedback for extracting even minute differences between measurements. But now that you mention it, it has indeed some things in common with the Wave Arithmetic package. This actually gives me the idea to add division and multiplication to the package for completeness.

EDIT: I have now updated the project to include four modes: Difference, sum, multiplication, and division.

I am seeing a pattern here: it seems that spectroscopists keep toolbags of useful packages that do similar things. I have a procedure ("wave scale and subtract") that does some of the things your panel can do, but as usual your panel is more sophisticated and does a lot more.

I will attach my little procedure here, just in case you are curious, but it doesn't do anything other than a small subset of what you do here.

At one point in the mid- to late 90's (Igor 3 to 4), the toolbox was collected under the package SpXZeigR. I had an entire suite of features, help files, and tutorials. You won't find the original anymore (I have it somewhere on an archived CD). You will find a scattering of references to it, including a doi article that I did not even know about until just now.

I always wished to have had the time (and/or co-developers) to sustain the package.

Yes, I remember SpXZeigR, and I had that and other packages in mind when I wrote the comment. I had already developed a set of tools more specific to the techniques I was using at that time, so SpXZeigR never really entered my workflow.

RE SpXZeigR ... Sad as I am to see the package fade into the historical records, I am also glad to see a plethora of well-designed packages being provided to take its place.

I remember SpXZeigR. If tech support queries reflects popularity, it was fairly popular :)

John: The support that WaveMetrics provided to sustain SpXZeigR was greatly appreciated.

I didn't mean that it had lots of problems! No matter how well designed your package is, people will get into trouble. So any package that gets used a lot will generate some number of queries, regardless of its quality.

Tony, thank you for sharing your solution for this problem. It looks very nice and sufficient for the task (I would miss the shift in x, though). I hope the DiffGen project will be of use for you (and others) then. Yes, the problems and solutions of people in the community seem to be similar. Good thing, that there is a place to share. I am happy that I didn't have to come up with the ~10 projects I am using from the site (mostly your stuff, Tony). :)

By the way, I didn't know or use SpXZeigR. Must have been before my time. ;)

And before SpXZeigR there was technical note 020...

Tech Note 20 still exists in all its variants. And it still works!!! But the tools you folks have been making available are far superior.