This project provides tools for working on 2D spectral data, and was inspired by the WaveMetrics Image Line Profile procedure (now replaced by the internal Line Profile tool). The basic functionality is similar at first glance, but the GUI has many convenient features tailored for spectroscopic data such as detector images, (energy) scans or intensity maps. In short, a horizontally or vertically integrated profile between two ROI lines is calculated, which can be saved, compared or even used to modify the 2D data. Other functions (such as normalization) are applied directly to the 2D data. The GUI works directly on the input data, but a backup is saved upon start. Several quick-tools to work on 1D-3D data are included as well.

To start, select a 2D wave in the Data Browser and then go to ‘Spectra Tools’ -> ‘Image Profile …’ in the top menu. Or use the command line:

A quick overview of all controls can be found below: 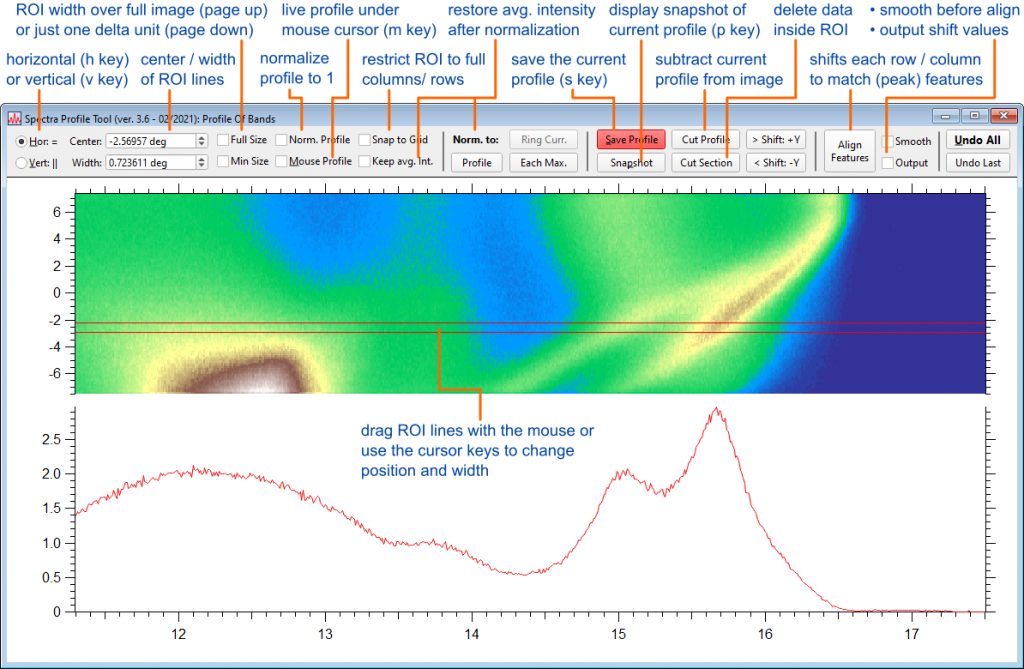 The Save Profile and Snapshot buttons

The Snapshot button will instead create and display a backup of the current profile for comparison. Each button press updates this snapshot to the current one. This profile will not be saved.

This button removes the columns (horizontal) or rows (vertical) inside the ROI region. If the data at the beginning of the wave is removed, the scaling is adjusted to account for the deleted points. However, if data in the center is removed the scaling cannot be adjusted, since a waves scaling must be always linear and continuous. Be aware that this may lead to a mismatch between the image data and the scaling. If the scaling is important (e.g., a continuous energy scale), either refrain from using this feature or take care to only remove sections at the edges.

The current profile will be subtracted from each column (horizontal mode) or row (vertical mode). This can be used, for example, to remove constant features from a measurement which appear undisturbed in part of the data and thus can be selected with the ROI.

This button has an additional functionality only in horizontal mode: The spectrum can be shifted each column step according to the Y-axis delta. In other words, each increasing column the Y-scale delta value is added to (or subtracted from) the profile’s x scaling. This subtracts the profile in diagonal direction. This is useful to subtract features which change with the parameter on the Y scale like, for example, spectral features moving with increasing photon energy.

These two buttons only work horizontally (regardless of the selected mode) and are used to add or subtract the Y-axis scale from the X-axis. In other words, the X-scaling of each column is adjusted by its respective Y-scaling value; the data is recalculated into a parallelogram. This will straighten features in the data which were changing with increasing Y values. An example would be a photon-energy (Y) scan of a spectrum where certain spectral features increase in their (X) emission energy. Subtracting the photon energy scale from a photoelectron spectrum in a kinetic energy scale would give binding energy, while adding the photon energy scale reverts back to kinetic energy. The effect is illustrated again with above example data: 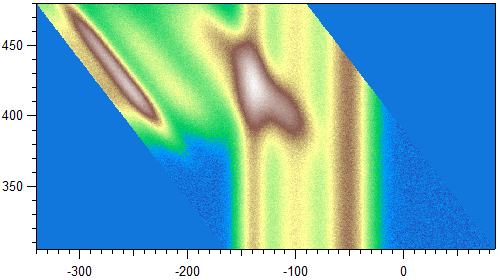 This algorithm looks for similar features of each column (horizontal mode) or row (vertical mode) and tries to align these features for maximum overlap by shifting each column / row by a certain amount. The algorithm uses wave correlation and shifts the data in whole point steps (no interpolation). This can be used, for example, to correct slight shifts of peaks in a spectrum or to estimate the shift of a peak versus some other parameter like time or position:

Often, it is not desired to align to the full data with lots of different features. Setting the A and/or B cursors onto the image will limit the range from which the reference is selected to maximize overlap with only one selected feature. This might still fail if many similar features are present.

Activate Smooth to smooth the data before aligning. This can improve the results for noisy data.

Activate Output to write the shift values into a wave with the name ending "_shft". The output is scaled by the 2D data’s wave scaling.

Note that the algorithm is ‘dumb’ in a sense that it only looks for the maximum correlation and not if peak features really match etc. In the worst case this just aligns artifacts such as noise.

Some useful functions are available in the Spectra Tools menu:

Two functions and one global variable are used to provide the functionality for the user button:

You can modify the constant and the two functions directly at the beginning of the procedure file, but it is more convenient to provide your own code in a separate file or inside the experiment environment. Use the Override keyword in front of the Function / StrConstant statement to override the standard definitions inside the package. Have a look at the example implementation inside the project’s procedure, which is used to normalize the ring current of synchrotron experiments saved inside the 2D data itself.

While the user button is intended for normalization, it is really a free-for-all button for any modification to the 2D data you may want. You could instead write a function which, for example, splits the image in half or applies an interpolation or does something completely different in each experiment file.

The following code shows the current implementation of the user-definable normalization button:

Wow. That single handily replaces 90% of the scripts I use every day with one convenient panel!

Thank you for sharing 😊

Great to hear. Thank you for your comment! I think this tool saves me the most time as well (others are graph-related tools which I haven't put up here yet ;). I guess the other 10 % are specialized scripts only related to your field? Please let me know if there is a feature which would make your (and others) life easier.