Note that it is always better to directly include the correct background function during curve fitting for analysis instead of subtracting data 'by hand'. Most of the background types provided here are also found as fit functions in the Multipeak-fit package for Igor 9.

I tried my best to test everything thoroughly, but you should verify the correct behavior yourself for critical applications. Bug reports and suggestions for new features are welcome. 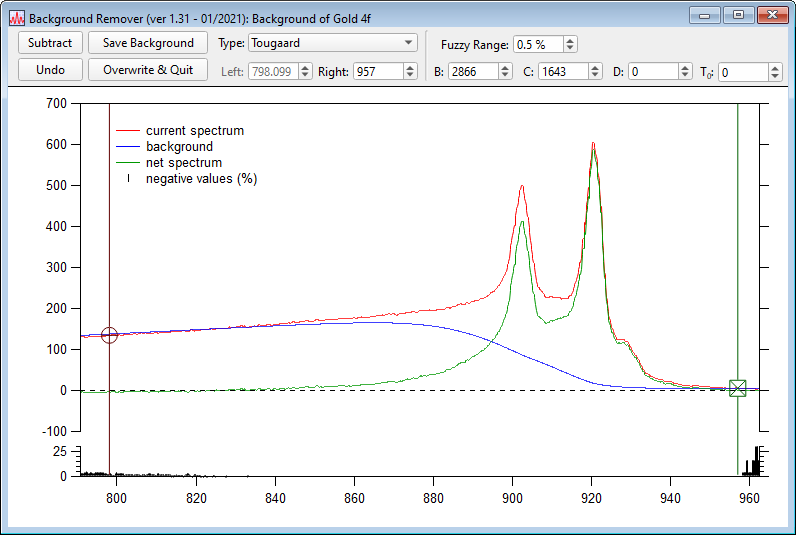 Basic controls in the GUI:

To start, select a (1D) wave in the Data Browser and then select  'Spectra Tools' -> 'Background Subtraction ...' in the top menu. Or use the command line:

Running your own code:

You can generate backgrounds using the function:

Populate the BackRemoveStruct with the desired parameters and provide both the original data (datawave) and a wave which the background will be written to (backwave). Both datawave and backwave need to have the same size and scaling. Here is an example (for data with an x-scaling from 0 to 40):

Very nice, Stephan. For years I have been meaning to add Shirley and Tougaard to the baselines package, but the only inelastic scattering stuff I do is Raman, no XPS or anything like that, so I never got around to it. This is great.

This would make a more graceful exit if the data browser window is closed:

For the buttons in the top left corner of the window to display properly on a mac, without text clipping, the minimum widths are about 63 and 114. Mac uses a larger font than windows for buttons (and doesn't allow you any say in the matter).

Tony, thank you very much for your kind comments. Getting useful comments like this is one of the reasons to finally release this tool here! In fact, I did not realize the problem with the data browser, since I cannot imagine running Igor without. ;) Also, thanks for the size check on Mac. I know about the size mismatch between the two OSs too well, but unfortunately don't have easy access to a Mac. I can 'lend' one from time to time, and will try to test my GUI design. I uploaded a small patch to address these points.

I was using your baseline package in the past and found it very useful. Feel free to take any code from here if you find it useful to add to your package.

I just thought I would say that this, along with your spectra difference script, will be extremely useful for so many people using Igor in the spectroscopy community. The work you have done on the multipeak package is equally awesome. It is all much appreciated, and it makes it much easier to recommend Igor as a solution that just works "out the box" for this type of analysis.

Thank you very much for your kind comment! I am super happy that these tools are of use for others. Did you already had the chance to test the new Multipeak Fit package? Just let me know if you find any bugs or have suggestions for improvements. I am currently polishing up a third project for release, which is inspired by the Image Profile code to work on 2D images (ARPES data, MCP images, energy scans etc.). I hope to get it out next week.

In reply to Hi Robert, Thank you very… by chozo

No problem. I have been using the new multipeak fit package. It is great and has already found it's way into my workflow and replacing my notably worse scripts for fitting voigt profiles. An easy way of fitting multiple Voigt functions with the two widths defined (rather than a shape parameter) is critical for so many of us and has really been lacking in Igor until now.

I have not come across any bugs yet... but I will let you know! My only long-term comment would be setting advanced constraints is still somewhat unintuitive. Even adding some more check boxes to quikcly allow coefficients above K1 to all be set the same would be a time saver.

Sorry for taking this thread off-topic! To bring it back on-topic, in case you didn't know, there is a problem installing the background remover project using the Project Updater. You get the error message: "Could not find packages at https://www.wavemetrics.com/project-releases/21532."

Thank you for the report. I have fixed the project page now and the Updater should happily accept the package.

OK, I will go a bit off-topic as well: If you have ideas or requests for the new Multipeak Fit then you should definitely write an email to the support. The WaveMetrics staff can otherwise not imagine what people want exactly, and I too have often just proposed / implemented what I need or what was on the request-list anyway. I think it would be a matter of half an hour to implement a checkbox for the height / area coefficient K2. For higher coefficients it may be a bit trickier, since not all peaks have them. Anyway, just let your wish-list be heard. :)

What was it that prevented updater from installing the file? I worry that the code that parses the 'all releases' web page is a bit fragile. In fact, I'm tempted to change the installer and updater to use the latest release info from the main project page and ignore the all-releases page.

Tony, I forgot to set the 'Version' field, which apparently makes the Updater think there is no release. I also found a small bug with the right-click menu, but I post that below the Updater project.